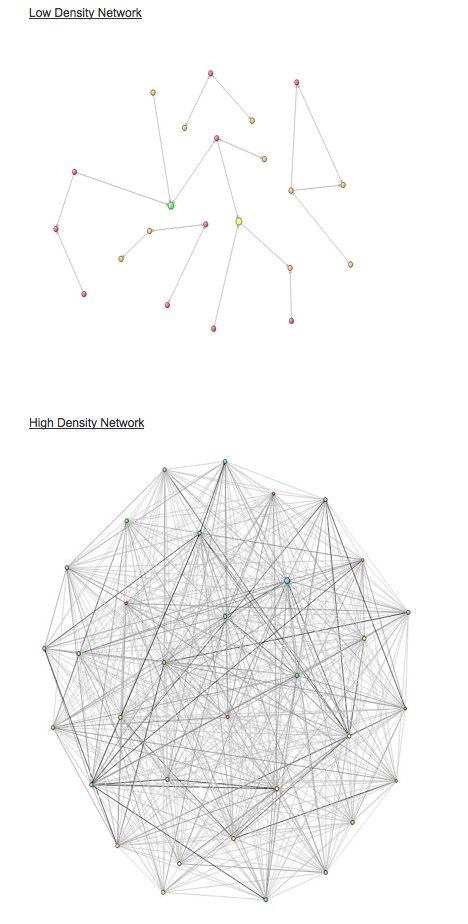 For background, see my previous article on the topic. Many studies that analyse networked learning (NL) or computer-supported collaborative learning (CSCL) using social network analysis tend to use density as a metric of interaction quality. Specifically, the studies assume that a high density is something to aim for. However, my data shows otherwise.
Now, density is a metric of the connectedness of the network, and varies between 0 and 1. A density of 0 means no-one is connected to anyone else, while a density of 1 means everyone is connected to everyone else. Intuitively, in a learning scenario, having people talking to a lot of other people seems like a good idea, so it is understandable that a high density might be chosen as a measure of good interaction.
The results from my analysis of 23 classrooms showed two things about density:

The takeaway message: Smaller groups will have a higher density. Comparing densities for the same group over time may make sense, although one should be careful about the conclusions that are drawn, but comparing different groups on the density scale is just absurd. Basically: don’t use density as a metric, unless you really have a good reason to do so and can justify your decision based on previous research.
More information in my article The Applicability of Social Network Analysis to the Study of Networked Learning published in the Journal of Interactive Learning Environments in 2009.